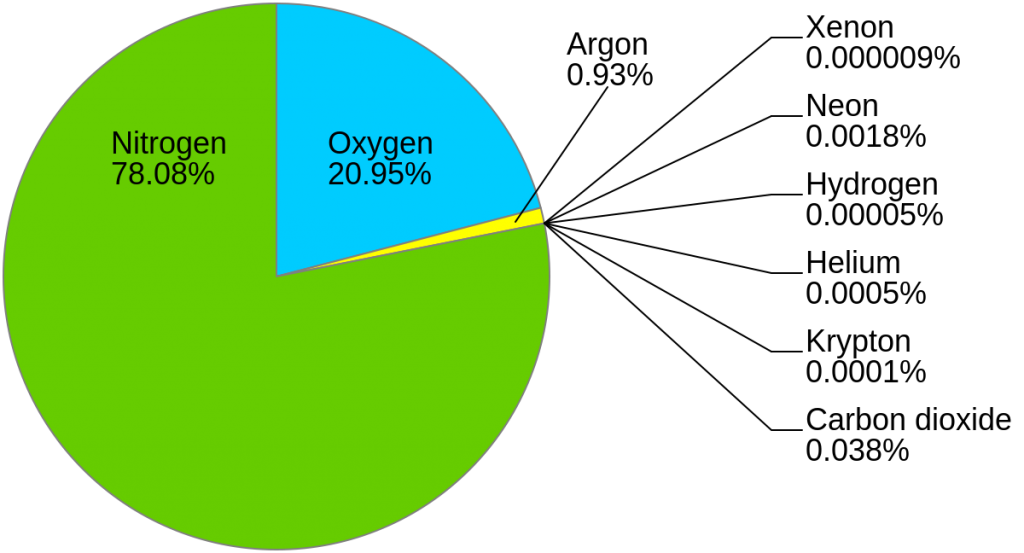 Introduction to air gases as raw materials for cryogenic industry:

One of the main raw materials of production products in Prestley gas industry is gases in the air, so it is necessary for the staff of the production unit to know more about these gases.

We know that air is a mixture of different gases. Each of them has its own unique characteristics and is of great importance for various industries and medical cases.

Characteristics of rare gases are that they are non-flammable and chemically neutral or have very little reaction. These characteristics have made them very important in their application in industry.

What is Rare gas or Noble gas? Rare gas is a gas that has almost no reaction with other substances and in a chemical reaction its atoms do not combine with the atoms of other substances. In cryogenic science, these gases are known as non-condensable gases. Due to the lightness, they accumulate at the highest point of the cold box and never liquefy there, so rare gas is sent out of the device through the drain valve. They are called rare gases because they are very non-reactive and the outer shell of their molecule is electronically stable and complete, so they do not take on any other electrons and do not combine or lose electrons. , He, Xe, Kr, Rn (not two atoms such as oxygen and nitrogen gases N2, O2)

What is inert gas? A neutral gas is a gas that has the lowest and lowest degree of reaction to other substances, such as nitrogen gas, which is used to lower the oxygen concentration in containers in food packages to keep the oxygen that causes it from oxidizing away. Or, for example, tankers charge nitrogen gas to bring the oxygen level inside them to eight percent to make the oil in the ship non-flammable.

The application of each of them is as follows:

1. Helium: Helium is a gas that is much lighter than air and is used in balloons to stay afloat. Another feature is that it does not burn in air due to its neutrality, unlike hydrogen, which is used in balloons due to its lightness. But it is flammable and has caused terrible accidents many times.
2. Neon: When high voltage electricity passes through neon gas, it produces white light, so it is used to make billboards or fluorescent lamps.
3. Argon: Rare argon gas is a neutral gas that is used in incandescent lamps because the incandescent metal inside them does not burn in argon. Argon is also used to create a neutral atmosphere at high temperatures of the metallurgical process. Argon is the cheapest gas. It is neutral and has the highest percentage of rare gases in the air.
4. Krypton : Krypton is used in fluorescent, flash and laser lamps.
5-Xenon: It is also used for fluorescent lamps, flash laser.

Nitrogen Gas (Nitrogen): Nitrogen gas, which is the major constituent of air, is a colorless, odorless gas that is slightly lighter than air. Nitrogen does not produce combustion but is a suffocating gas that is used to extinguish fires.

Oxygen gas: Oxygen gas, on which the life of living organisms depends, is a colorless, odorless gas that is 1.1 times heavier than air.

Liquid oxygen is light blue, odorless and tasteless and 1/14 times heavier than water. Its boiling point is -183 and its freezing point is -218 degrees Celsius. Oxygen combines with a strong affinity for almost all elements except neutral gases to form oxides. The most obvious of which is the rust of metals. Its fastest composition is combustion. Although oxygen itself is a non-flammable substance, when combined with oil, it produces the largest explosion with the slightest spark.

Carbon dioxide (CO2): Carbon dioxide is another gas in the atmosphere. This gas is produced by burning organic matter in the presence of sufficient oxygen and is a colorless, odorless gas. It condenses at a temperature below -78 ° C and forms a solid white body called dry ice. Liquid carbon dioxide is formed only under certain pressures.

Because this gas is heavier than air, it always spreads to the lowest point. If you breathe it, the person first feels short of breath and after a short time suffocates. Unlike oxygen, which causes a flame to burn, carbon dioxide causes the fire to suffocate, which is why it is used in fire extinguishers.

The amount of humidity in the air varies according to the season, altitude and time of day. Its maximum is just before sunrise and its minimum is around 14:00. The boiling point of water is 100 degrees and its freezing point is zero degrees Celsius.

Important Note: The air that the compressor of oxygen and nitrogen generators sucks contains two important impurities called water vapor and carbon dioxide. These two impurities must be removed from the air before entering the cold parts of the device (cold box). Otherwise, they freeze in Kalman and disrupt the operation of the device.

These two impurities condense in the compressor coolers and are trapped in the traps and are directed out through the drain valves every hour. The rest of them are separated from the air in the dryer and purification system.